Rochester Car accidents can leave you and your family struggling to recover. Your injuries may be severe, and the thought of fighting the other side for compensation may be more than you can handle right now. At a time like this, don’t give up on yourself or the compensation you may be entitled to recover. Our experienced Rochester car accident lawyers can handle your claim while you focus on putting your life back together.

Since 1987, Powers & Santola, LLP Rochester accident law firm, have fought for justice on behalf of clients who have been seriously injured as a result of car crashes and other catastrophic accidents. We proudly represent Rochester car accident victims and fight to get the compensation they need.

For a free initial consultation, contact us online or call our Rochester office now.

Motorists have a duty to drive safely. Unfortunately, many drivers don’t take this duty seriously. They drive with distractions, they speed, and they follow too closely, they fail to yield right-of-way, and engage in other dangerous, related practices.

Driver negligence can take many forms, including: 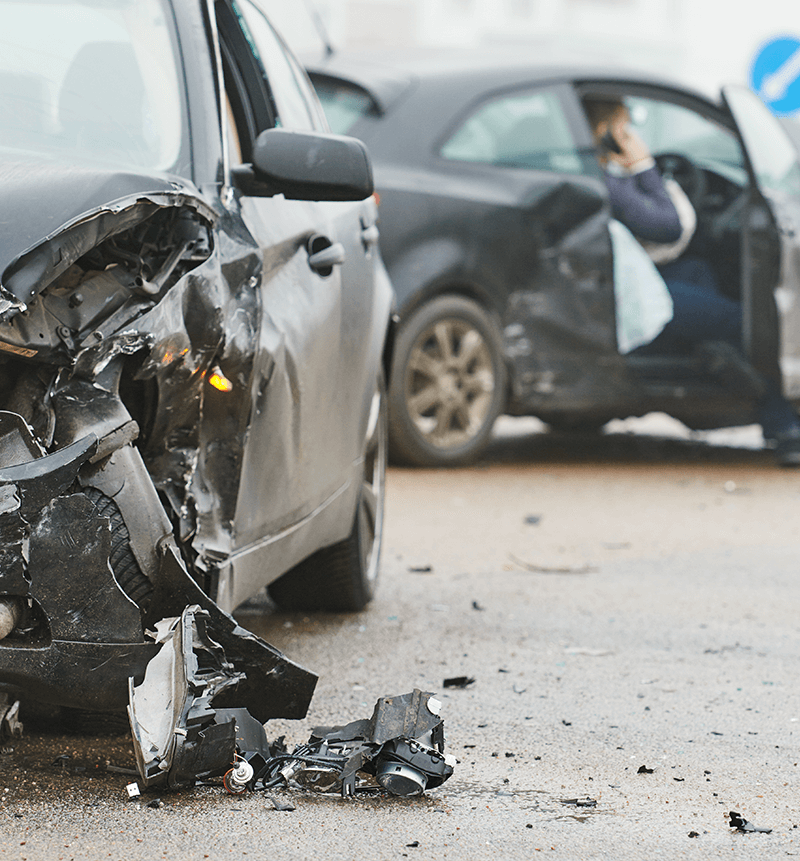 If another driver’s negligence has harmed you on the road, get legal help for your claim. Our Rochester car accident lawyers can help you build your claim and seek the compensation you need.

Most Dangerous Intersections
in Rochester, NY

Driving can be dangerous at times in Rochester. Pedestrians, bicyclists and motorcyclists face a high risk of collisions with motor vehicles as well. In fact, the N.Y. State Department of Health reports that, during one recent three-year span in Monroe County, traffic accidents caused, each month on average:

Intersections tend to be the areas with the highest rate of crashes and injuries, especially ones in busy commercial areas, near schools or roads with heavy traffic. Reconnect Rochester, a non-profit organization, provides a “crash map” that people can use to identify some of the worst intersections in Rochester. As the map shows, those intersections include:

Even if you are a highly safe driver, the reality is that you can encounter careless and reckless drivers wherever you go in Rochester. If another driver caused your crash, you should seek help from an experienced Rochester car accident attorney right away.

What Can a Accident Law Firm Do for You?

An experienced car accident lawyer knows how other drivers’ negligence can harm you. Your injuries may be severe. When you’re trying to heal, it can be overwhelming to tackle a car accident claim at the same time. Our car accident lawyers can build your claim, advocate for you, and handle every aspect of your claim from start to finish. We can: Your Legal Options
After a Car Crash

After a Rochester car accident, you have many options for pursuing compensation. Our car accident attorneys can help you build a claim against the responsible party’s insurer and, if needed, pursue a lawsuit against those responsible for your injuries.

A claim after a car accident may include compensation for:

The cost of medical treatment for your injuries.

This includes the treatment you needed immediately after an accident, and the treatment your injuries may require in the future. Medical treatment including therapy, surgery, rehabilitation, and other specialized treatment can add up fast. A car accident claim can help you cover the medical bills that may be piling up.

Lost wages and lost earning opportunities in the future.

When you’re injured in a car accident, your claim may include damages for the work and wages you’ve missed. If your future career and earning potential have been affected, you may be able to recover for those losses too.

A car accident can leave you disfigured and in serious pain for years to come. An accident may also give rise to lasting emotional harm such as anxiety, depression, and other serious psychological problems. If you’ve been injured in a car accident, and you’re suffering physical or emotional pain as a result, you may be able to obtain compensation for your injuries.

If the responsible parties are unwilling to settle, you may wish to file a lawsuit and take them to court. In some cases, courts may impose punitive damages on defendants when their conduct was criminal or exceptionally reckless.

If you’ve been injured in a car accident, contact our car accident lawyers in Rochester today. We can advise you on your legal options and help you understand the best path to compensation.

Car accidents are violent and painful events that can leave healthy people struggling with serious injuries for months, years, or even longer. Head and neck injuries, spine injuries, and internal injuries such as broken bones and organ damage frequently result from serious crashes.

Head injuries are common in car accidents and occupants of a vehicle may strike their heads against the steering wheel, dashboard, or other hard parts of the vehicle interior. Vision loss, disfigurement, fractures, and traumatic brain injury (TBI) are all too common when this happens.

When safety equipment such as airbags fail to deploy, injuries that could have been prevented may instead threaten a victim’s life. After a head injury in a car accident, even the best medical care may not be enough and injuries can follow victims for the rest of their lives.

Neck injuries such as whiplash are also extremely common in car accidents. When the head is flung forward by an impact, the neck and the surrounding tissues may be harmed. Muscles may be torn, ligaments may be damaged, and spinal discs may be injured. Whiplash may take time to show up, so even if you don’t feel any pain immediately after an accident, be sure to get a medical evaluation to prevent future problems.

Spine injuries and back injuries happen in many car accidents. Injuries depend upon the force of impact and where your vehicle was struck. During an accident, it’s easy for your body to be thrown around, resulting in injury to the spine and back. Spinal cord damage can lead to pain, long-term discomfort, and depending upon severity, to paralysis and life-threatening complications. An accident may also injure muscles in the back, leading to lost work and long-term problems.

Internal injuries are common in serious car accidents. The force of impact can leave victims with bruised organs, broken bones, and internal bleeding that can threaten their lives. These injuries require professional examination to diagnose and treat.

These and many other injuries are common in car accidents. After a crash, get the medical attention that you need as soon as you can. After, contact our Rochester personal injury lawyer as soon as possible.

What to Do
After a Car Accident

The immediate aftermath of an accident can be overwhelming. Here are some tips to simplify the process for you:

Pain and Suffering: A Real Consequence of Auto Accidents

As can be seen and heard in Tracy Morgan’s recent interview on the Today Show, pain and suffering is a very real consequence of auto accidents. Whether you can seek compensation for the pain and suffering you have experienced in a crash in New York, however, depends on many factors.

Back on June 7, 2014, Morgan was seriously injured when a Wal-Mart truck rear-ended the van in which he was riding. Other passengers riding with him also sustained varying degrees of injury. One passenger, comedian James McNair, died in the crash.

The alleged cause of the accident was extreme driver fatigue, as the truck driver reportedly had not slept for at least 24 hours and was reported to have been moving at an excessive rate of speed.

Although Morgan does not recall the accident itself, he told Today that he is very thankful to be alive – especially knowing the devastation the accident caused and the physical injuries he sustained, including a broken leg, multiple broken ribs and traumatic brain injuries that left him in a coma for days.

His recovery continues to be a long and arduous process – not only physically but emotionally as well. Having suffered the loss of his good friend and mentor in the same accident, Morgan described his pain in the Today interview.

“Bones heal,” he said, “but the loss of my friend will never heal.”

Morgan’s experience reflects how car accident victims experience extreme levels of emotional anguish and pain, which can be just as serious as their physical injuries.

Although nothing can ever “undo” an accident or erase the horror of being involved in one, some victims may be able to seek compensation in a car accident claim.

Can You Sue for Pain and Suffering in New York?

New York Law allows victims to pursue compensation beyond no-fault insurance for accident-related pain and suffering so long as they have suffered “serious injury.” In other words, an injury that has resulted in:

How Do You Prove Pain and Suffering?

When referring to the term “pain and suffering,” we are talking about not only physical pain and injuries but mental trauma and emotional distress as well.

Individuals who have sustained broken bones, back injuries, head injuries, or any other injuries in an accident can seek damages to cover medical expenses and other accident-related costs.

When an individual suffers from anxiety, depression, guilt, frustration, insomnia, or loss of consortium as a result of that accident, he or she may also qualify for pain and suffering damages.

Evidence that can be used to prove pain and suffering may include:

The auto accident attorneys of Powers & Santola, LLP, understand the trauma and challenges accident victims and their families often face following a car accident. We know you may have numerous obstacles to overcome. We can work hard to help you seek just compensation for the harm you have suffered. To find out more about what our firm can do for you, contact us today.

After a car accident in Rochester, you probably have questions about your next steps. Don’t wait to get the help you need. The experienced Rochester car accident attorneys at Powers & Santola, LLP know how to protect you during this traumatic time. We’re prepared to investigate your accident, calculate your losses, build your claim, and fight to get you the compensation you deserve.

For a free initial consultation, contact us online or call our Rochester law office now. Click here to find our location.